The Fly-In Fishing Experience – Once in a Lifetime Trip?

Sometime more then once  – some of our guests have returned season after season, as each visit is unique.
The greatest compliment our guests can give us is returning for another trip.

Hi Dan. Just wanted to thank you again for another great trip. We really appreciate you picking us up early and all you do for us. Always top notch service. Thanks again

Hey that’s a great shot Dan. Yes we had a great time and some good lifelong memories for sure! Thank you for being such an enthusiastic and professional host- enjoyed the times we had very much. And I sincerely hope we can do it again! 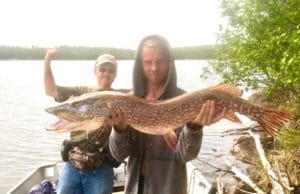 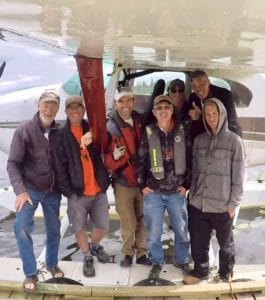 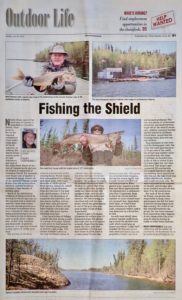 Thanks again to you, your mom, Jim and Dave for the great service.  A great time was had by all.

Dan, for the second time in two years I find my self writing to say Thank you.  After taking my father up last year for his 70th birthday we found ourselves having to do it again.  Last year really set a high bar with great fishing for lake trout and monster pike.  We kept our expectations modest again this year as nothing is certain when dealing with nature and the weather.

Well, once again you managed to exceed all of our expectations! From the tour of Fort Smith the first night, to the welcome company of Dave and Jim at the lodge and of course the fish, the fish. The lake trout co operated and 3-6 lb fish were numerous.  The pike fishing...words really can't do justice to what we experienced.  3-6lb fish at times wore us out, 10-15lb pike kept things interesting and then there were the Giants. 5 pike from 44-49 inches. The only thing more satisfying than reeling them up from the depths was watching them swim back down when it was all over. The elation of the trip only was tempered by the sadness of it ending.

You truly have an amazing resource in your lakes and an operation that matches them.  We both felt that you work really hard to make sure your guests have a great experience.  You have provided my father and I with priceless memories together and for that, thank you.

I will forward you some pictures which will say more than I could every write.

Wanted to drop you a note to thank you for a fantastic trip!  As I mentioned when I booked the trip, this was for my father’s 70th birthday…but as it turns out, my brother is moving to Houston in June, so the timing for the trip could not have worked out better.  My dad says it was the best fishing he has ever experienced.  All of your staff…Carol, Lavern, Jim and Dave are great, and could not have been a nicer bunch of people to spend the week with.  The meals prepared by Carol were amazing. I actually gained 8 pounds while I was there.

Andrew Lake is a lodge we would never hesitate to come back to again.  You run a first class operation.

Thanks again Dan, and I hope you have a successful year.

Based on the reaction of some of our guys, I would be surprised if some of them havent’ already contacted you to say what a wonderful time we all had…..it was totally awesome….from the flight right up from Ft. Mac,  everyone was great…Pierre was something else..we all got on his case right off the bat and he took it immediately in stride…setting the tone for the trip in and the trip out…he’s a super guy….we were all pleased that we were able to help him unload the wood when he came to pick us up on the final day….he did a beautiful fly over the camp before he landed and I'm just mad as hell that none of us had cameras ready when he did so as were were all sitting around having a coffee and he came in a bit early….your run a great show Dan and without exception, all of our guys had a fantastic time
Rod Chernos - Calgary, Alberta

“I still recall with a smile the 18 pound bruiser that smashed my Jitterbug as it popped along the surface of northern Alberta’s Andrew Lake just after ice out one June.”
~Ken Bailey – Outdoor Canada Magazine

“As promised I’m sending a copy of Reid’s 46” long 35lb Pike that he caught on Canada Day. He couldn’t lift the fish, which is why I’m holding it in the picture. Thanks for another great trip. We hope to see you again next year.”
~Ian Seal – Alberta

“At nearly four feet she was the biggest pike I’d ever caught. This however, was not the end of the story, just the beginning. Over the course of a week we returned half a dozen more times to this location and another that was almost identical on the west shore of the lake and caught and released in excess of fifty 40-inch-plus northerns.”
~T.J. Schwanky – Outdoor Edge Magazine

“My trip on the Thelon was outstanding. I would have to say it was right up there with the best 6 weeks I can remember in my life. The timing was perfect. I was at the narrows between Beverly Lake and Aberdeen Lake when the Caribou began to cross the river. I watched for 2 days as they came by in groups between 12 and 100 animals. As soon as one group crossed, another was approaching the river. I saw lots of Muskoxen, a few moose, and best of all — I had lots of time alone on a beautiful land and river.”
~Norton Smith, Oregon – Kayak Expedition

“Thanks for a amazing week:
4 Men
12 Hours a Day
752 Fish
Carl won most overall fish. Over the 4 days on average he caught a fish every 12 minutes!”
~Laura Smith

“Had an amazing 13 days in NE Alberta on a remote lake in the Canadian Shield. Some beautiful scenery that included seeing Lynx, wild bison in Wood Buffalo National Park, and bears on our way up. Dan Wettlaufer from Andrew Lake Lodge & Lynx Tundra Lodge flew Rick and I in for 13 days. We had all kinds of weather and even some nice days! Fall is late up North and conditions were a bit tough as it never froze and the leaves were still green which was a surprise. Still the hunting was good and we did call in 5 bulls. I had decided this trip to focus on taking a bull with archery gear and the first bull came in on a rope and I was at full draw at under 15 yards to a rutting, grunting bull but never gave me a shot in the alders. Several other bulls were in rifle range but never gave me a chance with the bow or got the interest of my hunting partner. On the final days I switched to the rifle but the moose sensed this change and hid! It was a great hunt that also included a few nights of catching up with an old friend under the northern lights, catching more pike than I have in all my years with many over 10 lbs and the biggest at 19lbs. Plans were discussed on what and where to go next time already…I won’t lie though and I was happy to see the float plane yesterday and get back home to the girls. My bed was full when I got in this morning and it was great. Now to dream about my next adventure and be happy I have a wife (and kids) that supports my dreams wither it be running for 20+ hrs in the mtns, sleeping at 2000m above the mtn goats or going on 13 day adventure in the middle of no where. I am blessed to exp what I have this year and a family that allows it. Now back to hockey practise, picking up dog shit, learning how to do do makeup, etc…… Life is good and would be better I am sure with some sleep!”
~Shane Mascarin